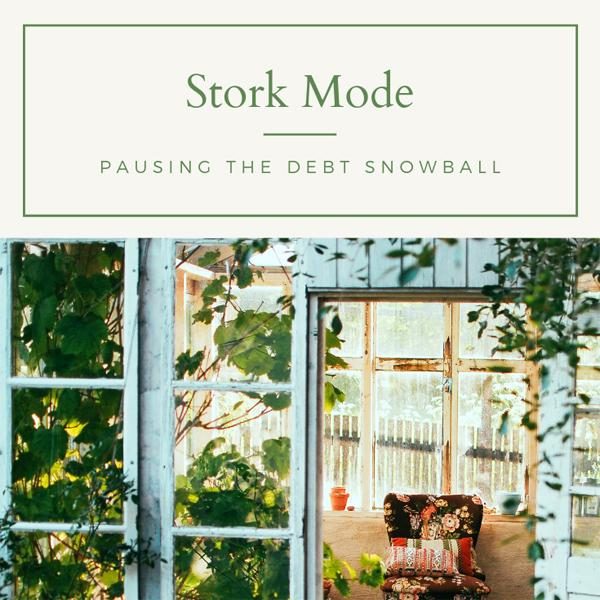 Pausing the debt snowball to do stork mode is nerve wracking. To go back to just minimum payments on things when you have been making a little progress, kinda sucks. We are beyond excited to welcome a new baby next year. It’s just weird to take this break from making progress. Like, really weird.

Our focus over the last few months has been to try and cut things back to give ourselves a bigger shovel toward the debt. Now, we are cutting some more things back and saving all that money up for the next 8ish months. I worked on our budget today and it was so hard not to put that “extra” money toward a student loan. I wanted to so badly, but instead I created a new budget category called “stork mode.” Which was totally weird to see on our budget program.

For those of you that only follow us through our blog, you probably don’t know the difficulties we had with Wildchild in his first year of life. Particularly, the almost deadly struggle we had in just his first two weeks. It’s still agonizingly hard for me to discuss it, almost five years later, but here it goes.

Wildchild came into this world after a beautiful, hard, and amazing 36 hours of labor. Freebirthed into the hands of his Ba, while his father watched just off to the side. I am not gonna get into his freebirth too much, but it was definitely the right choice for our family.

We basically struggled to breastfeed right from the start. We didn’t have any in person support. Heck, I was babysitting three days postpartum, which probably contributed to some of the difficulties we had. Hello stress. Anyway, after getting set up with an IBCLC, getting his tongue tie clipped, etc. we started noticing he was getting a lot more yellow. We would bring him out into the sun or hang out near a window and it would get a little bit better.

At a follow up appointment to his tongue tie clipping, he was very lethargic and even more orange than before. We were immediately sent to Children’s hospital where we learned that he was so extremely jaundiced that he would most likely need an exchange transfusion. Turns out, we had ABO incompatibility. The whole thing was incredibly traumatizing, but Wildchild responded really well to light therapy and we did not need an exchange transfusion, thank the Gods!

His bilirubin level was so high, that at follow up appointments with those affiliated with Children’s, they had actually heard about him. It was a freakishly horrible time and that didn’t stop the struggles. We continued to struggle with breastfeeding and weight gain for about the fist year of his life. We had to supplement with a special formula that cost $40/can. Just on and on. Things we were in no way prepared for. Things that aren’t part of routine problems after birth. Just so much stress.

What About After Stork Mode?

Assuming that everything goes smoothly, we will dump everything from our stork mode fund onto the next item in our debt snowball. I also just realized that this baby is due around the same time that we get our tax refund lol. That could be quite the wallop to one of our debst! Oh, that makes me so happy!

After that happens, we will adjust our budget again. We will be paying close attention to our grocery budget because breastfeeding requires a ton of calories. We plan to cloth diaper after the meconium phase and use cloth wipes. That should save us a bit of money since I will be reusing our cloth stash from Wildchild.

We also saved quite a bit of baby and toddler clothing. If this baby turns out to be a girl, we should be covered for a few months. After that, the clothing definitely turns into more “boy” type stuff. In that cast, we might take a bit of the stork fund to buy ahead in the clothing department a bit.