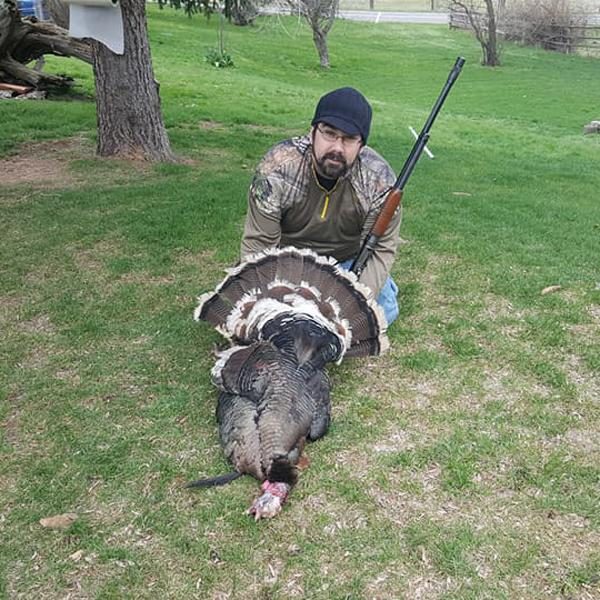 At the beginning of this year I made the decision to go out hunting. I thought that it would be a good experience and another way to get out in the woods, besides camping.  I had/have family members go hunting for years, but I had not given any thought about doing it myself. So I made the decision to go through the classes online, did the field test and passed both without a problem.

Now that I had passed my hunter ed I had some time to decide want I wanted to hunt first. I thought about deer, elk, and bird. I landed on turkey as it was the first season that was open since I passed hunters ed. I figured that if I did not like to go out and hunt turkey that I would not care for hunting anything else. So I got in touch with one of my buddies that lives out in Eastern Washington. He tells me that there are so many of them out here you could throw a rock anywhere and hit one, so we set things up for a 3 day hunt.

Now it is time to go. It takes around 4.5 to 4 hours to get out to his place. On my way there, I see tons of deer and saw one turkey 15 min away from his house, which I thought to myself this is a good sign. After I arrived at his place, we caught up with each other since we hadn’t seen each other in years, and then headed out. We went up into the hills behind his house and saw nothing for the rest of the day, oh well.

Next day we went back out to the hills. I made the comment hit one with a rock huh, he replied well they were just here but they went up to the high ground cause they know. After hiking around we picked a spot and made some calls to get them to come in. After a while, we finally heard some calls back. I was sitting on the side of a hill under a tree just waiting with my shotgun. My friend is making the calls behind me a bit. I heard him whisper to me he is coming in so get ready. I can hear movement, but don’t see anything. At that time I look up the hill and I see the little blue head of the turkey walking by and then he spotted us a flew off. Damn. With that, we moved to another spot and hung out for a few hours. With not seeing anything in the new spot, we went back to where we saw the turkey a few hours back. On the way back up the hillside we went up higher than we were originally and sat down in some thick brush. My friend made a few more calls and a few minutes later, I see a little blue head pop out from behind a tree. By the time I was able to whisper to my friend that he is down there, he was already 10 yards out from me, but I was not able to get a shot due to the brush I was sitting in. I watched him walk around where we were sitting and come up from behind us and see us. Damn again. We had a few hours of daylight left so we thought about trying to track down that turkey that just left. We went and hiked higher up on the hill and made some calls. Well the turkey called back which I did not think he was going to do. We spent the rest of the daylight hours trying to get him to come in. I knew which way he was and waited, but after a bit and the sun starting to go down I decided to start slowly moving in to the area he was. Right when I see him and get ready to shoot, he sees me and flies off. Damn. With that, we stopped for the day. We figured if we could get up early enough we could wait for him to come down from the tree in the morning.

My last day there, we get up early so we can get that bird. We can hear them all over the place but they are not coming to our calls. Damn. They are gone. My friend says I got a spot that we should try before you leave. With that we hiked up into the hilly wood that is on his property. We find a nice place that’s level, but the problem is that a few years back some of his land was hit by a wildfire, so there wasn’t really a place to hide. Well, we finally found a place. He made some calls and they would call back then I heard other calls which I thought where other hunters trying to call them in but it turns out they were just more turkeys. My buddy worked his magic and got them to head our way. He was sitting behind me and to my right and at the same time I saw a bird come in I hear him whisper don’t shoot any of those, thought to myself ok strange why not, I watched them out the corner of my eye run right past me, what I didn’t know is that my buddy saw the big Tom walking all puffed up looking at the decoy. So when he gets in my line of sight, I hear my friend say take him. With that, I took my shot; no more than 10 yards out I missed. Damn. The turkey takes off. At this moment, it was as if everything slowed down for me. I watched him take off, in my mind I’m thinking all that work and he freaking misses what the hell, then it dawned on me hey you still have 2 more shots in the gun, with that I moved the gun lined up my shot again and took it. With the second shot, I got him. Man what a rush. With that, we headed back down to his place.

We found out that I got a 19lb turkey with a 9.5 in beard. I knew from that moment that I wanted to keep doing this. In the time that I was over there I hike 25 miles. I know that you are not guaranteed to have a harvest every time you go out, and I was lucky to get one. I was also lucky to be able to hang with an old friend and see some beautiful country that I have not seen in awhile.